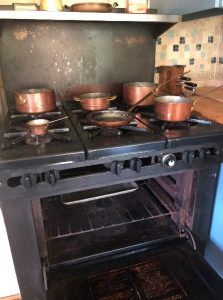 My ideal Saturday night includes one dinner guest who stirs a copper pot of fresh seafood on “the Beast.” That’s my ancient, restaurant-retrieved gas oven. It is so old no one will even repair it any longer. It is so battered I’ve developed a pioneer-woman knack for guessing temperatures and baking times. But everyone loves the Beast; and I can’t imagine replacing it.

A few gather around Zum Windhound, where everyone helps himself to drinks. Other guests caravan food to table. It’s a mix of old-and-new friends joining me for an intimate dinner.

Eventually, we settle down to eat. Tempered by European wines from grapes even older than the Beast, under the glow from flickering candlelight, faces soften and eyes warm. That’s when, if we are lucky, time softens, too. We gentle up in ways rarely possible in the hustle of a restaurant. 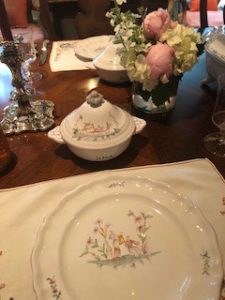 Dinner parties deliver soul and real food, meaning: as welcome as house gifts are: a pot of orchids or homemade pimento cheese, the gift of talk is even better.

Talking in a safe dinner party, instead of burying our barrage of daily thoughts, we can process the relative merits of what we are thinking. We weigh them against the boundaries of another’s perspective. When the vibe is right, even when our world views are different, we reach for connection on levels that transcend surface politeness. In such a dinner-party “zone,” our hearts expand. we listen, learn, grow, and impact one another.

I once had dinner with the late, great Charlie Tremendous Jones, famous for saying, “You will be the same person in five years as you are today, except for the people you meet and the books you read.”

As Charlie implied was valuable, I like a mix of old and new friends to shake up the patterns of conversation. This recent guest-list included a film maker, architect, retailer, designer, developer, professional gamer’s mother, and baker- in a wide range of ages. Talking until just shy of the witching hour, here’s a small sampling of topics we explored:

Bringing it home for you: Imagine that this dinner party is a metaphor for your meetings. Well, it is in so many ways – or could be. You, as the leader, need a lot of skills. Here are five idea ideas why and common pitfalls:

When the party was over, and all was said and done, the guests not only enjoyed being there, we each learned a hell of a lot. After almost five hours, during which time, anyone could have easily and gracefully left, they stayed, because there was never a dull moment.

You may or may not agree with every idea here, not the point. Instead, think differently about your meetings and for better outcomes-as this example indicates.

At the outset of this post, I mentioned that a client from 20 years ago called. In catching up, she said two things about me she’s never forgotten.

How many times in your life has someone called you to say that your, ordinary company meeting inspired them over a 20-year period? You do not have to invite divisiveness, competition, attacks, and humiliation, as some think, to have great meeting success. I see other possibilities.

PS. Creating delicious food is another way to connect with people that satisfies my soul. If you’d like the menu for this recent dinner party, which you could easily recreate, too, send me an email alex@speakingcenterstage.com, with MENU in the subject line. And if you’d like to learn more about Center Stage and how to create outrageously successful company meetings, well, that’s a specialty as well.

Get 10 Tips to Build Your Speaking, Sales and Influence